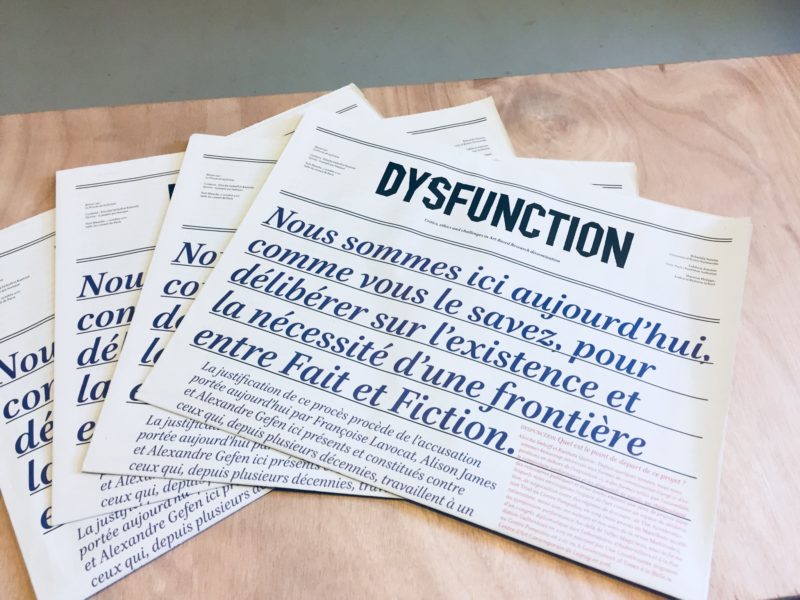 Nuit Blanche, October 7, 2017
Audience room of the Council of Paris in the Paris Town Hall

DYSFUNCTION’s editorial team dedicates this issue to the Trial of Fiction by le peuple qui manque (a people is missing). It continues the discussion around fiction started in our previous issue dedicated to a research initiative involving fictitious facts commented scientifically. To further investigate how research can use fiction, we hereby give a partial, incomplete and biased account of the mock trial organized against fiction, which took place during the Nuit Blanche on October 7th, 2017.

Though sometimes considered as artists, Aliocha Imhoff & Kantuta Quirós consider themselves as “curators for theory, art and research.” Their approach resonates with the recent practical turn in academia, as they care about bringing practice into theory. Staging a (fictional) Trial of Fiction is a good example of the challenges and the paradoxes involved when working on forms mixing art and research. The result is neither an academic colloquium nor a dissemination event accessible to everyone. Simulating a trial against immaterial entities that a priori cannot be sued (moral values, concepts, opinions, history) seemed to us a fascinating critical tool requiring a closer investigation.

This issue was stimulating to prepare, we met experts from various disciplines, we got out of our comfort zone to explore other research fields and to challenge the role of research dissemination, and we ended up raising even more questions. How can we grasp the complexity and ambivalence of a complex topic and make it more accessible and artistic without dumbing it down? Hybrid forms that mix art and research hence raise the question of knowledge production. Should they be tools to explain complex research findings in a form that is comprehensible by everyone? Or does artistic transformation and fictionalization create a decrease in knowledge and make complex research findings weaker while trying to make them accessible to everyone?

Thus, our objective in this issue is not to make another trial in print, nor is it to draw conclusions on the content of the debates. We are rather interested on questioning the very form that a people is missing adopted. DYSFUNCTION’s approach in this issue is to present ‘data’ that is collected, transformed and presented as ‘layers of meaning’, the various texts of different types collide and overlap to create a different representation of the Trial of Fiction reflecting the complexity of the debates.

The dialogical form of this issue gives voice, several months after the event, to the ‘actors,’ the participants, and the public, in order to gather their thoughts, feelings, perceptions and personal recollections of the trial , as an attempt to critically and affectively reenact the experience of the event – which was multiple and disparate.

Our artistic and research process focuses on revealing the polyphony and plurality of experiences through different types of texts: interviews, conversations, transcripts, articles, through different graphic forms: excerpts, irregular columns, illustrations disconnected from the texts, colours, overlaps, … Our objective with such a format is to apply our own hypothesis about art-based research methods and the production of « critically affective performance texts » (Linstead, 2018). The issue you are reading right now in all its appearances and content becomes a “hypertext”. Far beyond the written words it includes the layout, graphic forms and regimes of (il)legibility at work.

In DYSFUNCTION’s first issue (July 2017), we detailed four key processes we went through in order to produce such different art-based dissemination outputs. As we were working on the Trial of Fiction, we activated these four processes, which shaped our editorial choices and our investigation.

First, the Dissensual process: Building commons on agreeable disagreement, which we identified as a major moment in the collective building of any art-based research involving several researchers and/or artists. Many points of view confronted and disagreed, during the Trial as well as in this printed account. But contrary to a trial, which aims at deciding who is right and who has been wronged, we aim at presenting the various perspectives and let the readers free to build their own judgement. The form of a printed newspaper plays a major part in this process, by demanding the reader to choose a reading strategy across the pages. Furthermore, we not only aim at investigating which agreeable disagreement carries the content of the trial, but also which agreeable disagreement emerges from the reading of our art-based take on another research experiment also based on art.

Second, the Alterity process: Alterity is the method and the purpose: the self can be altered because it is alter. Accessing the given is not a question of objectivity nor subjectivity. It is the question of the mutual relation between the given and the observer. Rather than pretending to access the perfect alterity through the gate of data, we should remain conscious of how our self is affected by the data. The process is subsumed by the motto Let data affect you. Here our « data » consist in reports, accounts, opinions, notes, but mainly and over all, in encounters with the Trial’s participants. Affected by these encounters, we therefore account for the relational moves that occurred during the investigation process, not in an explicit, analytical and rational way, but through the various shaping, extractions, quotes, and unequal weighing of the reported conversations, which should mirror our own affected selves as well as the contributors affected selves, all remaining strangers to one another. The complex entanglement is reflected by the uneasiness of the reading and the jumps from one speaker to another, one kind of discourse to another, one colour to another, without the artificial coherence privileged in classical publications.

Third, the process of Alteration, rather than considering the collected data as an access to the “fact”, consists in fictionalizing it. What we would like the reader to grasp is the fictionalization of the real operates on two levels. Fictionalizing justice in a mock trial is the first layer. The second layer is the fictionalization of the research itself that the process inevitably produces. For us, rather than seriously diving into the issue of fiction against facts, the most interesting parts of the mock Trial are the imaginary and performative dimensions. Its strength as an art-based research is not to conclude about the guiltiness of fiction or the real, it is to tell a story, the story of the Trial of Fiction, which we contribute to the dissemination of.

Forth, the Staging process (Mise-en-scène). We stage a mise-en-scène of the mise-en-scène of a theatrical judiciary ceremony: as another layer on layers of staging. By doubling the Trial with our approach and imagining other future possible events and performances around this issue, we thus operate a re-framing of the Trial and position it in the field of art-based research, which considers the performativeness of a never-ending text game as a playground. Our goal is to foster what art-based research should aim at starting a continuous ongoing conversation, where any reader is an actor and can change the end.

The conversation is now on…