Lectures at the Dakar Biennal 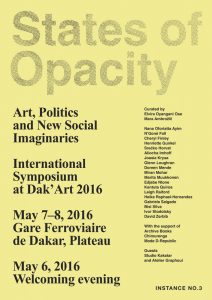 The Sunday May 8, 2016 during the symposium
“States of Opacity”, curated by Mara Ambrožič and Elvira Dyangani Ose.

Abstract
States of Temporal Opacity
Aliocha Imhoff & Kantuta Quirós
If modernity has decreed, or even imposed a fundamental backlog on the extra-occidental worlds, an insurmountable, fathomless “debt of time” which they should supposedly overcome, making these geographies waiting patiently in the “waiting room of history” (while constructing historic time as a measurement of cultural distance, Nicolas Sarkozys’ “Speech of Dakar” is still haunting us). It is henceforth and simultaneously that post-colonial epistemologies of temporality are confronted with another temporary injunction: the time of global simultaneity, the illusion of co-temporality, a global time.
Paul Gilroy, thinker of black diaspora, talks about these translators of time, chronauts of a black Atlantic, marked by the catastrophic, temporal fracture that constitutes the Middle Passage. These are situated in another tension and another temporary disjunction. We are talking about secret times, hidden from the eyes of the world, kept away from prescriptions and codes. These secret times reply to the need of opacity, strategic opacity, opacity of resistance, “state to opacity” said Glissant. The vessel, as it is shown by Gilroy, is the best metaphore for the capacity of staying between two-times. The vessel of slave trading, but soon the vessel of afrofuturist mythology become “connective symbols of crossover in time and space projecting a plurality of possibilities of unleashed and unalienated movement.” Furthermore, afrofuturism imagined precious nots of temporality, that slip through modern and progressive visions of time which has this injunction of co-temporality that reveals a potential double-ontology, in between what is and what could be. The Black Quantum Futurism Collective, based in Philadelphia, as an example, is working on this conflation of quantum time of physics and African temporality. In the form of a chronopolitical series our film project “Les impatients” constitutes, for itself, an attempt to collect non-aligned temporalities and indications of a returning future, in the middle of an historic moment which we are going through, of the biggest political obstruction.

lectures
(articles in the same category)