The Queer Cinema festival is one key period of reflexion on the identities. 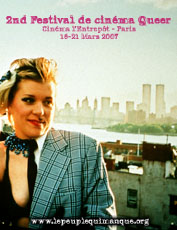 Heir to feminism, and the cultures gay, lesbians and trans, the theory and the political movement Queer déconstruisent the kinds and sexualities. Following the example Jean Genet who, while inviting to transform the shame of bet in pride, called with a reformulation, by dominated themselves, individually and collectively, from their subjectivity, the Queer cinema, reflection of new forms of relations, to be in the world, from artistic proposals, came today to upset the modes of production and the same forms of an art of the cinema.

The second edition of our festival will be held of the 16 at March 21, 2007, with the cinema the Warehouse. We will draw during these six days some axes of this fertile movement: crossing of the sexual and racial problems, black feminism, policies trans, incarnations cyborg and freaks, evolutions, reflexion on the body, etc, through more than 40 films, often new in France, with crossed cinema militant, contemporary art and experimental cinema. We will invite to reflect, in the presence of movies/vidéastes, activists and academics, as much with the policies queer, feminists and postcoloniales, that with the production of individual and collective images, with the role of art in public space and/or like space symbolic system, in its capacity to even transform reality, our subjectivitys and our imaginary.
We will leave this year an important place with the feminist cinema and will try to trace of them the convergence points with the thought queer.
Several go are impossible to circumvent during the festival, of which in particular:
The opening of the festival around the work of the artist performer Leigh Bowery, figure worship of the Eighties and the fury of the culture underground. The vertiginous course of a creator of incredible costumes which redrew new bodies defying all the standards.
The whole day devoted to the meeting between “Queer movement and post-colonialism”, with in particular “Black Nations/Queer Nations” of Shari Frilot, projected for the first time for 12 years in France, and “Mama No me lo dijo” of Mujeres Creando, has celebrated it Bolivian radical feminist group, which starting from performances and of poems insolents, réapproprie public space for transforming best.

Incredible “the Dust Dandy” of Hans Scheirl,
film-worship with crossed experimental cinema and science fiction,
which, by a proliferation of Clerc’s Offices, fluids, mutant beings at
the mental and body borders completion burst, gives an account of what
could be imaginary a queer in its most unslung form, holding at the
same time of the cyborg and the post-identity. 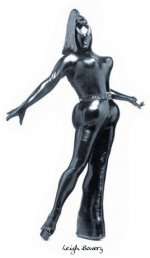