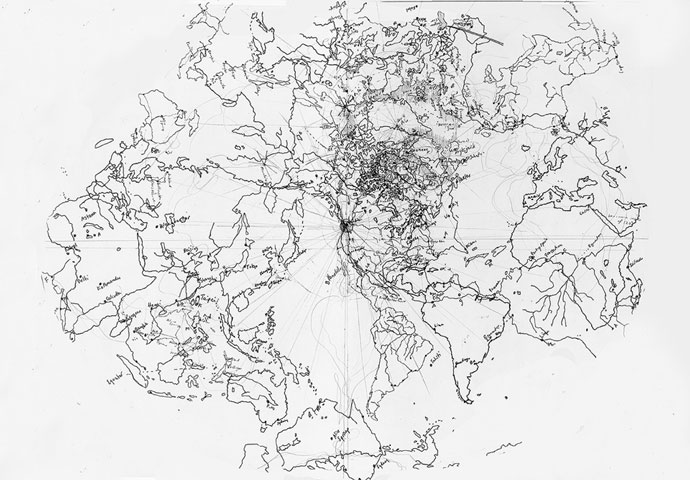 Beyond the Magiciens Effect

A global geography of art has emerged since the late 1980s. During the interval of a three-day symposium, a diplomatic scenography will be imagining alternative geographies of art.

Many would agree that a new international geography of art has established itself since the late 1980s. A global shift that has been described by the art theorist Joaquin Barriendos as the “Magiciens effect”[1]. Often portrayed as decentering the once predominantly European-American canon (with its accompanying cultural politics), the shift really seems to be reengaging with a universal geopolitical language: “global art as a postcolonial lingua franca offered to the world by the West”[2]. This geoaesthetic regime appears to be based on a crucial paradox, which together perpetuate asymmetries and hierarchies at the heart of this new globalized narrative : on the one hand, it is characterized by the fragmentation of narratives, the opening up to postcolonial studies, situated knowledge and epistemologies of the South; on the other hand, it is marked by a return of meta-narratives, of the global museum (as new form of the universal museum), a redeployment of world art history as methodology.

So global art has failed – what comes next? What geoaesthetic regimes can we invent and deploy for the future? What institutionalizing gestures can we initiate to provoke a new shift? Finally, what museums and institutions can we reimagine?

The symposium will be using a diplomatic scenography, opening with a space for statements and complaints, and following with diplomatically negotiated proposals, during which we will collectively work on inventing other contemporary geoaesthetic regimes, acknowledging the power of fiction and thought experiments to produce scripts and scenarios that act as performative operators of possibles.

[1] Presented in 1989 at the Centre Georges Pompidou, Les Magiciens de la Terre was conceived as the first global exhibition. A monumental and polemical exhibition, Les Magiciens proposed to reintroduce long forgotten artistic geographies that had been kept on the edges of the art historical canon and its official narratives. Its curator, Jean-Hubert Martin, had invited for the occasion a hundred artists and “non-artists” from the Asian, African, and Latin American art scenes. Positing the failure of Western art histories to justify opening the museum to these new scenes, Martin appealed to ethnographic and anthropological discourses as heuristic tools, which had the effect of substituting endogenous histories of art with yet another exogenous discourse. The paradoxes of this exhibition still innervate a significant portion of current-day reflections underlying museological discussions on the internationalization of art (whether the exhibition is claimed as a forbear or critiqued and deconstructed for its presuppositions). According to Joaquin Barriendos, “Aesthetic globocentrism” may be construed as resulting from the “Magiciens effect”, if one assumes that the spatial turn of global art began in Paris in 1989 as a consequence of the cosmo-ethical revisionism initiated by the emblematic exhibition Magiciens de la Terre.