Wednesday December 19, 2007 with 20:00
with the cinema Méliès
Attention : This is an automatic translation !

Meeting
in the presence of Lionel Soukaz and Elvan Zabunyan (historian of art,
specialist in American art and the feminist theories and postcolonials studies
in the United States, author of Black is a color)

“In 1972, an exposure was created about which one spoke much: “Womanhouse”. Under the direction of Miriam Shapiro and Judy Chicago which became major figures of feminist art in the Seventies and Eighties (…), twenty-four women (whose Faith Wilding) arranged a house in Los Angeles. Space domestic becoming space of exposure, the distinction between public and private disappeared and conventions governing the representation flew in glares; the bathroom and the doll’s house became spaces of exposure “appropriate” to feminist art. “Womanhouse” encensait what was regarded as commonplace: the beauty products, the tampons, the household linen, the shower caps and the underclothing became highly artistic materials. All the media were interested in it, by often carrying out reports with feeling; the exposure brought the proof that feminist art had a public many and impassioned” Peggy Phelan, Art and Feminism, ED. Phaidon.
Womanhouse is a documentary extraordinary history on one of the feminist cultural events most important of the Seventies in the United States. It is not limited to being the witness of several famous performances such Waiting (Waiting) of Faith Wilding or Cock and cunt play (the part of the cock and the she-cat) of Judy Chicago, as well as various parts of the exposure-house Nurturant Kitchen (feeder Kitchen), Menstruation Bathroom (the bathroom of the rules), Nightmare Bathroom (the bathroom of the nightmares) or of the installation Linen Closet (Wall cupboard with linen), but also recalls the workshops of collective awakenings, the interactions with the public, and all the energy of this time. KQ&AI (distribution: le peuple qui manque) 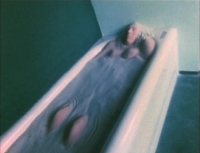 La marche gay by Lionel Soukaz
(13’, 1980) / in its presence
Gay walk, it is a ground which one presses: ground of Washington. The White House and the Senate are surely empty when thousands of gays and lesbians ravel during the Gay Pride of 1979 front their grids with Guy Hocquenghem, Kate Millet and Allen Ginsberg, at the same time actors and spectators of their own revolt. Of their own hope: what finishes finally repression.
“Lionel Soukaz is a rare author. He films without taboo, without concession. Child of May 68, he is that of the sexual release, the pleasure of living with excess his desires, drug, the sex. Sensitive witness of its time, that which films his/her friends, Guy Hocquenghem, Copi and the others less famous, films also the tragedy of the AIDS, of the meetings of Act Up to the white walls of the hospital. To speak about its style, its tone, his/her friend, the philosopher Rene Schérer, evokes “a despaired vitality”, Nicole Brenez, fighting experimental cinema, qualifies its cinema “of political Eros”. ” Aude Lavigne, France culture, 2002 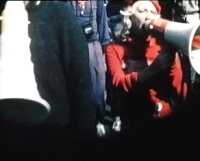 Jack Smith is one of the outstanding figures of the cinema American underground. Its notoriety and its importance exceed the circle of the experimental cinema, insofar as it influenced in a dominating way by its performances, the American theatre of end of the year 60. Flaming Creatures started as of its first projections the anger of the censure in the United States and it was a long time prohibited (Jonas Mekas and Ken Jacobs were stopped in 1964 to have wanted to present it publicly).
Flaming Creatures is turned on 16 out-of-date mm. A rare and famous film for its aspect innovative and shocking. A sexual film and sexually deviating where mix orientalism, vampirism, earthquake and transvestites in a quasi single sequence of dionysiaque orgy. Censured for its pornographic character the film however draws more on the side of the Greek tragedy. Ginsberg greeted of it the artistic free expression and its propensity with dissidence. (Cineclub of Toulouse).