Gender trouble
“Coyotes” and borders
Gender, migrations and artists of the performance in Central America.

If the Central America is the place today of a patriarchate which is articulated from now on with the complexity of an economic situation of globalisation, within which the maquiladoras1, the migrations transfontalières with the United States and a féminicide2 which currently prevails in Center-America, play a determining role, it is also the matrix of new generations of artists whose work of performances conceals a rare force and intensity. By presenting the work of performeuses artists ignored in France, we wished more largely to make us the reflection of vitality and radicality of Latin-American feminism and the expressivity and power of evocation of its incarnated resistances.
1 Maquiladoras: companies of subcontracting of products high tech (data-processing, laboratories, etc), subsidiary of multinationals, delocalized in Mexican territory, calling upon a not qualified labour, mainly of the women with very low wages.
2 the Central America became the zone of the American continent most touched by the unpunished murders women. One speaks even about féminicide (genocide against the women)

Who can erase the traces? Regina Jose Galindo

Poetess and performeuse, Regina Jose Galindo appears since the middle of the Nineties like one of the Guatemalan artists emblématiques of its generation. During its discussed performances, in which its own body is the vehicle by which she denounces the political and social conflicts, violence and the economic injustice, she pays homage to dead and disappeared from the civil war of years 80-90, and the genocidary dictatorship of the general Rios Montt. Its work is also a clarification of the violence made with the body of the women in the current world, and more specifically in Latin America, with the féminicide which has course in Central America, the survalorisation of the virginity of the women, their sexual exploitation, domestic violences. “I am a commonplace (…) I am the most common woman between the common ones” writes Regina Jose Galindo. Carrying until her limit the assertion which art is the life, Regina Jose Galindo transcends the artistic dimension of her performances, which contribute in a poetic way, to relieve, like it says it, the collective pain of the Guatemalan people.

“I express through my body, my kind sublimates it and its transformation is my manner of communicating my agreements and dissensions with the life.  By using it like a medium, I convey my objections with political disappointments, the patriarchal companies, and discriminating philosophies. ” Maria Adela Diaz
Emergent artist of the Guatemalan contemporary art, which, following the example Regina Jose Galindo, implements an esthetics of the reversal of the mark, Maria Adela Diaz works around the condition of the women and those of migrant and migrant in the United States.
Video-performances: Invisible Territorio (2005, 2 ‘)/Borderline (2005, 2 ‘) (distribution: le peuple qui manque)

Artist, theorician and police chief of exposures, Ursula Biemann are auteure many works around the topics of the borders, mobilities, technologies and of the genrée dimension of the migrations.
Video-test: Performing to border (1999, 45 ‘)

“Performing to border, investigation into the living and working conditions of the women in the vast back-yard of the US economy in the south of the border enters the United States and Mexico.
Taking as starting point a publicity of the Elamex company which sells the female labour with the price of a dollar the hour, the vidéaste watch that the social and technical construction of the border extends until sexuality from those whose “performance” is praised in the image. If the account of a woman “coyote” – or frontier runner of border – makes it possible to consider possible exits of this control system, the history of the murders in series around the Mexican city of Juarez raises worrying questions concerning the serialisation of the human life for the manufacture of goods hi-tech (computers, etc). ” (Multitudes 15, winter 2004) 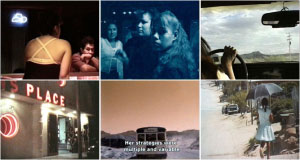