In the presence of ORLAN and Caroline Bourgeois (curator of the exhibition Valie Export at the CNP, in 2003) 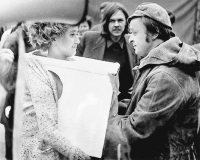 During years 60-70, the feminist artists shook the contemporary art in the disorder which they knew to insufflate in extreme cases of art (“the private one is political”, critical world of art and report/ratio at the institution, etc). We will present the vidéos of three major artists who, between social criticism and artistic representation, knew to transmute the relationship between body, glance and female condition.

In 1967, the Austrian artist Valie Export chooses for name Export, a mark of cigarettes, evoking as much the potentially commercial dimension of the artistic productions that the stereotype of the woman like consumer goods. “I wanted to bear neither the name of my father nor that of my husband; I wanted to seek my own name”. By a series of feminist actions of a great transgressive load, the artist, resulting from the actionnism Viennese – of which she will in addition have criticized a certain machism – engages his body in the battle. Defying the order of the glances, it upsets the setting in scene voyeurist of the female body by the invention of a Cinema of palpation and groping (Touch Cinema, 1968), performance of street of “revealing” of the patriarchal power struggles which govern the representation of the women. With …Remote…Remote… (1973) it brings into play the “marks of the history exposed by body actions”, marks of a “slavery passed”, and consequently reached a feminism of a rare power.

“I never made a work (drawing, photograph, sculpture, video, performance) without thinking it as a body which would seek other bodies to exist”.

(ORLAN) One knows primarily French artist ORLAN for his practice of “carnal Art”, of the plastic surgeon and of the body modified, work on construction and the artificiality of the identity, the skin and the standards, one often forgets that she initially always questioned the statute of the body and particularly of the female body in the history of art and the company. In a series of performance of MesuRAGES going back to 1978, ORLAN, evaluating the place which each urban and architectural place leaves with the individual, measures his body at the institution (the Centre Pompidou) and métaphoriquement registers its body of woman – who provides him her measuring unit, the ORLAN-Body vis-a-vis the world of Article.