Attention : This is an automatic translation !
We do not commemorate 68, us did not know 68. We have only the nostalgia of the future. Happening and total art, insurrectionary militancy and revolutionary homosexual face, black power and radical feminism will compose a cinematographic against-cultural newspaper “of the years 68”, which involved in their wake a deep upheaval of the relationship between art and policy, with the force inalienable, contradictory, and always alive.

Meet-discussion at the conclusion of projection in the presence of Jean-Michel Humeau, Lionel Soukaz, Aliocha Imhoff and Kantuta Quiros.

“The happenings of Jean-Jacques Lebel are the exact point where the theatre explodes. ” Jean Paul Sartre.
“Temporary Situations, founded on the desire”, between erotic impulse and upheaval of social, unconscious and imaginary space, the happenings of Jean-Jacques Lebel, plastics technician and initiator of the happening in Europe, were often regarded as préfigurations of the events of May 68. Icon of the movement of May, it was one of the iron-of-lance, at the time more particularly, of the catch of the theatre of Odéon. (A.I & K.Q.)
“The happening cannot nor does not want to replace a strike, an sex act or a psychoanalysis; it is not spectacle but collective dream. To apprehend such an experiment, it is necessary to achieve an experiment which makes jump the doors of perception. ”, wrote Jean Jacques Lebel, Carolee Schneemann, Jocelyn de Noblet, Daniel Pomereulle and Erro in 1964. 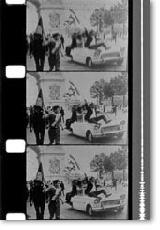 “In the Rising of youth, there are a walk in Paris, One evening resumption to the cinema, but more interiorized much, it was a type which thought of the topic of the social evolution, of the revolution… And then also I succeeded in pirating the Current events of 1968 and I mixed all that… There was at the same time Paris, a new theory of political economy moving, a report on this theory and an aesthetic invention. ” – Paris seen by the cinema of avant-garde (1923-1983), Paris Experimental, 1985
“Ideas of the Rising of youth, that Lettristes were the first, since 1949, to expose and defend, ideas which found their illustration partial in the events of May 68, and whose topicality did not weaken… are found in the sound of film, in the shape of a text of Isidore Isou who summarizes them and whom a stream of consciousness of Maurice Lemaître intersects per moments, a such Fabrice vibrating with the battle of Waterloo. Under this angle, the film remains an alive leaflet, which combines… “aesthetic and political”” Works of cinema (1951-2007)
HE ! VIVA DADA
by Jean-Michel Humeau (1965, 39min) / In its presence

“Of the happening to the mime, all the forms of a total art were successively tested. (…) we thought that these documents remained a proof of our generation to finish some with the taboos, the pretences, the excrement of our company. The testimony of an Allen Ginsberg poet appeared necessary to us to clarify interior this step close to that of Artaud or Michaux and which, through this waste, this bursting of the structures morals aims at a total art for a revival of the man. ” (extracted)
Magnificiently filmed by Jean-Michel Humeau, “He! Viva Dada” is a report of the second Festival of the free expression, “laboratory of the feelings”, organized by Jean-Jacques Lebel in the American Center of the Artists, Raspail boulevard, in May 1965.
Happenings and parts signed Fernando Arrabal, Roland Topor, Alejandro Jodorowsky, Jean Jacques Lebel, Jocelyn de Noblet, Ben, Charlotte Moorman  (distribution : le peuple qui manque)

“SCUM will continue to destroy, plunder, sabotage and kill until the system based on the money and work crumbled and which automation is instituted on all the levels, or until a sufficient number allied women with SCUM makes it possible to reach these goals without resorting to violence”.
Reading put in scene of the book of Valerie Solanas, S.C.U.M. Manifesto is an indictment against the company dominated by the “male” image and the “virile” action, presented like substitutes to the deep impotence of the men. S.C.U.M. means “Society for cutting up men”.

“At the same time call to the action and one emergency period old portrait in activism, this genuine proclamation of Black Panthers was at its time a tool for recruitment as much as a piercing criticism of the socio-economic situation of the American blacks. ” Olivier Pierre (Festival Est-ce ainsi que les hommes vivent) 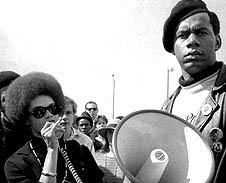 Witch-camararades perhaps seen like film-proclamation of a feminist against-cinema. “A film on the women/a film by women/a film for the women/With a camera of man. One day of the women will see these images of our sad survival and will wonder how we could support it. ” (extracted)
(distribution : le peuple qui manque)

“Crimped by the melancholy and the corrosive liveliness of the text of Gerard Jeanpierre, vibrating militant figure of the antipsychiatry during the Seventies, the wind blows where he wants, as its beautiful title reveals it to us, is filled up puffs of revolutionary poetry of after 68 and the 1st walk of homosexual pride in May 1971, year of the appearance of the FHAR (Homosexual Face of Revolutionary Action). Luminous farandoles and insolence of the slogans, sexual release and insurrection of the desires, the very beautiful one and too ignored film of Roger Danel, is also a load against the repressive systems. (distribution : le peuple qui manque) 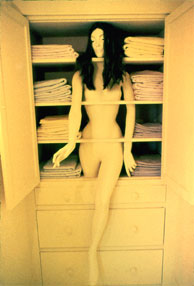 “In 1972, an exhibition was created about which one spoke much: “Womanhouse”. Under the direction of Miriam Shapiro and Judy Chicago which became major figures of feminist art in the Seventies and Eighties (…), twenty-four women (whose Faith Wilding) arranged a house in Los Angeles. Space domestic becoming space of exposure, the distinction between public and private disappeared and conventions governing the representation flew in glares; the bathroom and the doll’s house became spaces of exposure “appropriate” to feminist art. “Womanhouse” encensait what was regarded as commonplace: the beauty products, the tampons, the household linen, the shower caps and the underclothing became highly artistic materials. All the media were interested in it, by often carrying out reports with feeling; the exposure brought the proof that feminist art had a public many and impassioned” Peggy Phelan
Womanhouse is a documentary extraordinary history on one of the feminist cultural events most important of the Seventies in the United States. It is not limited to being the witness of several famous performances such Waiting (Waiting) of Faith Wilding or Cock and cunt play (the part of the cock and the she-cat) of Judy Chicago, as well as various parts of the exposure-house Nurturant Kitchen (feeder Kitchen), Menstruation Bathroom (the bathroom of the rules), Nightmare Bathroom (the bathroom of the nightmares) or of the installation Linen Closet (Wall cupboard with linen), but also recalls the workshops of collective awakenings, the interactions with the public, and all the energy of this time. (distribution : le peuple qui manque)
MIKONO
by Jean-Michel Humeau (1978, 11min) / In its presence

“Imaginary Portrait of a CRS, the Mikono sergeant. The images of the confrontations of the Latin Quarter in May 1968 and the comment which turns in derision the police force make of this film a success of subversion and irony. ” (distribution : le peuple qui manque)

“Daily life. Machine. Machine to be lived. Machine to be transported. Machine to be consumed. Machine to be burst. Consumption of the spectacle. Spectacle of consumption. Obsession. ” (Gerard Jeanpierre, extract) “the idea of this film, designed as of March 1967, largely anticipated the events of May-June 1968, since it had as a subject the revolt of youth, in particular coed. One can say that it was been used for point by the events, or rather than those allowed film to be born, with demonstrators who were not observers…
In 1967, the narrator (Gerard Jeanpierre) militated in a group “Seeks libertarian”, in which Daniel Cohn-Bendit took part besides and who published a small newspaper of the same name. Of course, the explosion of the revolt coed was not without incidence on the contents even film, which it contributed to nourish and direct. The author was itself in the middle of the action, while remaining a peaceful witness filming the events. (…)
Beyond the event-driven one, one notes that the reflexion of the narrator rises remarkably above the topicality and analyzes in terms of unconscious collective the “concrete neurosis” which then started to seize our cities. Let us greet this premonitory vision which one did not finish, alas, to observe the accuracy. ” Roger Danel / (distribution : le peuple qui manque)

“Transitory and blazing, directly related on the psychedelic revolution and the generation hippie, the cinema French underground (or as one liked to say at the time, underground cinema), emerged in the against-cultural effervescence which announced and prepared the chamboulements May 68. Movies of protest, dispute, provocation, refusal. Agitprop and rough poetry. ” Jean Pierre Bouyxou
“The films of Pierre Clémenti convert the political energy of the revolution into cinematographic substrates. To a poetic revolutionist Clémenti associates a policy of the forms and assembly. The libertarian contents marry an apology for freedom here. ” Jean Marie Samocki
“Chronic of this end of century… Testimony of my life, forms newspaper on my activities of actor before and after 1973. Stammerings, fulgurances, illuminations, revealed intimacy which half-opens the radiant slit of the conscience, long multicoloured snake, ribbon clearing a passage to the call of the signs” Pierre Clémenti

Exit of a Letter with Brion Gysin, this videotape is dedicated to the magic incantations of the painter and writer of Happy the Generation, Brion Gysin, inventor with William Burroughs of the literary cut-up. Whereas in 1974, Brion Gysin is made operate of a cancer to London, Francoise Janicot, Bernard Heidsieck, and friends poets and musicians decide to send this “sound” letter to him. “Realized on the famous revox has 700 of Heidsieck, it pronounces, with several voices, interfering themselves, answering themselves, the name and first name of Gysin. Sending with the direction first, homage, special dedication, that to say of other that the name of its recipient, discharged, catapulted in only one breath of multiple energies. Polyphonic part, this letter is a vital partition pulsated by the friendship. Brion Gysin could hear it, it had a ten years remission”.
The ressassement stroboscopic one of the words, their infinite chant and the ghostly presence of the poet make this band traditional of the psychédélie. (distribution : le peuple qui manque)
“Cabine Vidéo” –  Salle 2 – de 18h30 à 21h45
IXE
by Lionel Soukaz (1980, 48min) / In its presence

Ixe, a film dedicated to the law of the same name. “Ixe, like a cry, a wound, is a film implosé, crucifié, designed to be projected on two screens simultaneously. It is a quartering with the four cardinal corners, at the four ends: the war, the sex, the religion and drug.”. Guy Hocquenghem.
“Lionel Soukaz is a rare author. He films without taboo, without concession. Child of May 68, he is that of the sexual release, the pleasure of living with excess his desires, drug, the sex. Sensitive witness of its time, that which films his/her friends, Guy Hocquenghem, Copi and the others less famous, films also the tragedy of the AIDS, of the meetings of Act Up to the white walls of the hospital. To speak about its style, its tone, his/her friend, the philosopher Rene Schérer, evokes “a despaired vitality”, Nicole Brenez, fighting experimental cinema, qualifies its cinema “of political Eros”. ” Aude Lavigne, France culture, 2002

The cinema is not framed, muséifie not,
it is always alive, it keeps all, it does not lose anything.