For a Chronopolitical Approach to the Internationalisation of Art Collections

Article for the catalogue of the exhibition
A Republic of Art
From the 80’s to Today
27 June – 4 October 2015
French Regional Collections of Contemporary Art @ Van Abbemuseum, Eindhoven, Netherlands

Abstract: “If the “French case”, as Françoise Vergès once wrote, has long been characterised by a republican resistance – acting mostly as a veil over its colonial past – to the “epistemologies of the South” and postcolonial critique, how do we go about reinventing innovative cultural policies that take these contributions into account? How can we do this while setting time back in motion, liberating us from the presentism to which we seem compelled in Europe, particularly in France? How should we rethink the question of the collection, the constitution of a collection of international works emancipated from the positivism of history, if not by questioning the “regimes of veridiction” and their underlying time scenarios?” Aliocha Imhoff et Kantuta Quirós 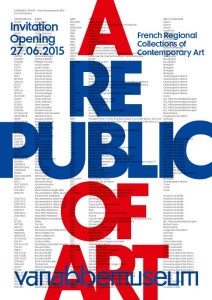 Can we begin to map recent cultural history? What do contemporary artists and their works have to say about their own time and place. How do we combine  the story of a nation with globalisation? A Republic of Art is an exhibition about the world of visual culture in the French republic from the establishment of the FRAC system (Regional collections of contemporary art) in 1982 right up to current developments in contemporary art practice today. This large scale exhibition draws works from these extraordinary and extensive art collections over the past 30 years.

The Van Abbemuseum was invited by PLATFORM to reflect on this collection that is embedded in French cultural and political history. The Van Abbemuseum was chosen because of the many experiments it has conducted with new ways of exhibiting and interpreting its own collection during recent years. A Republic of Art is a stimulating tour of the contemporary art which has been collected by the French government since 1982. In their works of art the artists reflect on the world around them, so that visitors are taken along through history, undoubtedly evoking personal memories.

Three decades of contemporary art
The exhibition starts in the early 1980s with works by celebrated artists such as Daniel Buren, Gerhard Richter, Cindy Sherman and Paul McCarthy. A Republic of Art reveals the emergence of new media with works by, for example, Dara Birnbaum and Harun Farocki. Luc Tuymans questions the reliability of mass media in his work.
Developments in film and literature are the source of inspiration for artists like Sophie Calle and Dominique Gonzalez-Foerster. Other trends become visible in the 1990s and 2000, such as the increasing interest in the environment and in alternative ways of living together in  society. For example, this is reflected in the works of N55 and Simon Starling.

The FRAC system
The Fonds Régionaux d’Art Contemporain (FRAC) was founded in France in 1982, consisting of 23 institutions in every part of France, even including Corsica and La Réunion. The FRACs, gathered in the umbrella organisation PLATFORM, have put together a collection of more than 26,000 works by (inter)nationally celebrated artists over the course of more than thirty years. Fifty per cent of the collection consists of works by French artists. According to
the FRAC philosophy the only point of purchasing works of art is that they become accessible on a large scale.
For this reason they organised big educational programmes and produce more than five hundred exhibitions a year, particularly in places that were not originally intended for art.

publications
(articles in the same category)