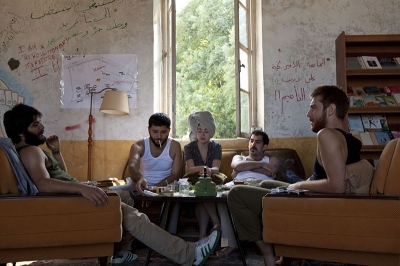 With Estelle Nabeyrat, curator and Rasha Salti, writer and curator

1974: Students demonstrate against a tuition increase at the American University of Beirut and occupy university offices for 37 days. With this revolt as their starting point, filmmakers Rania and Raed Rafei direct an absorbing documentary on revolution and democracy’s core issues through a meticulous re-enactment and theatrical improvisations in which today’s activists give their interpretations of 1974.
Lebanese filmmaker Rania Rafei has written and directed several acclaimed short-films and documentaries. Raed Rafei is a Lebanese journalist, filmmaker, blogger and reporter currently residing in New York.
…next