With the presence of Ingrid Lafleur, curator based in Detroit, USA. 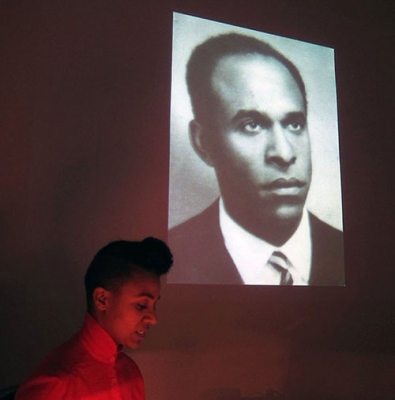 Kapwani Kiwanga – AFROGALACTICA: A Short History of the Future, performance, 2011-2012, Courtesy the artist

The United States of Africa were born on December 8, 2058. The date was chosen to commemorate the 100th anniversary of the first Pan-African Conference, which took place in Accra, Ghana, in 1958. It was during this historic meeting that the then President, Kwame Nkrumah endorsed the model of the United States of Africa, which called for the federation of African States. As early as 2058, efforts were aimed at uniting various African initiatives in the field of space under the umbrella of the Space Agency of the United States of Africa. The initial challenge was to coordinate all member states, taking into account different levels in practical experience in the field of space exploration. Even before the creation of the United States of Africa, there is evidence of a number of initiatives that took place in society at large in the field of astronomy. Throughout modern history, Africa has been subjected to chronopolitical projections: European colonization, acting in the name of Progress, constructed Africa as an ahistorical entity. Afrofuturism, as a philosophy of history, is not so much interested in reversing this archetype (by reconstructing an archeology of the past for Africa and its diaspora) but deliberately chooses the future as a site for historical action. In 1974, the jazz musician Sun Ra proposed with Space Is The Place a spatial and temporal utopia advocating space adventure and intergalactic escape as an alternative for Africans and African Americans. Kapwani Kiwanga, in the role of an anthropologist from the future, comes back on Afrofuturism and on its involvement in the development of the future Space Agency of the United States of Africa. She draws on archives from the past while projecting a science fictional future.